§17 - The fundamentals of Nethergate Campaign

Hey! I am writing this one primarily for people who did or want to read the last post; or the one before it. I hope it will help you understand what’s going on with the various new and tricky concepts in Eidolons! So open up your mind, take a deep breath, and let the new kind of rpg experience emerge, in your mind first :)

EDIT: this was supposed to a be short post, but... well, I hope it turned out well though xD

Anyway, let's dive into it!

Starflame, the First Light... Once a force of Creation, now the ultimate weapon of the Nether Gods.

Pale Flame is one of the Old Powers, with which the now-dead Demiurge shaped the Planes. Since his death, it became an uncontrollable force, that brought ruin to countless worlds. Yet on our world, on Edalar, the forces of the Underverse were thwarted by an Elven sorcerer, and the Flame was entrapped within him. His deeds were not well understood however, and he fell to the sword of a human king, passing the Curse to him. Since then, it was thus passed to the order of Veil Wardens, who have kept it secret and contained for almost five centuries. But now the echoes are rising again from Below. And as the Nethergate wakes, so does the Flame...

Gameplay-wise, this is what defines the flow of the campaign - once the Flame grows powerful enough, the game is pass on to the second stage, the Finale. And then you will meet some real challenge... The point is, you know from the start what you're up against, or at least some of it, you must squeeze every bit of power out of the Adventure stage!

Faced with annihilation, Tel'Razi, deceivers of Gods, carved a Gate in the very Heart of the world, hoping to tap into powers that lay Below...

Our quest is to carry the Flame all the way to the Nethergate and thrust it back into it, apparently by entering it.  I know it came out a bit too similar to the legendary Ring Bearer’s quest,  only it takes a lot more sacrifice, and more than two hobbits to carry out :)  But there are of course many surprises in our story.

For one thing, it must be understood that Nethergate cannot be reached by foot, nor is not a place where you can set sail to. Yet it is never too far from those who carry the Flame... and the path will be revealed, it must be! In other words, the game's finale will find you wherever you are, when the Curse grows strong enough. Your task is to be ready for it!

Oh yes, the fel revenants made of mystic ash and linked to the spirits of men they once were... No mere necromancer could hope to achieve such fidelity, such autonomy, such resilience...

After a Bearer dies - in Ritual or in battle - their ashes are cast into a Ring. Their soul is a more delicate matter, but without spoilers, let's say it is kept safe. Then with the power of Apholon, the Black Blade, you can bring back the hero's soul,  and it will use its ash to reform its body. Thus you summon eidolons to fight, for a time. (This will happen automatically if you are wiped out. And in Nethergate campaign, you will often be)

Soulforce is required to keep them from dissipating; it is a resource you gain by killing things, living or undead, as long as the Black Blade is with you (always!). It exists only within a dungeon, but if you have excess of it by the end of a run, you can use it to enhance some of your eidolons' equipment or skills.

This is your 'roster' of heroes! The good thing about them is that they are loyal to the fault. The bad - they are dead, and require other lives to be taken in order to serve you against your foes.

There are 2 major ways in which you use the Chain:

1) When both of your living heroes are slain, an eidolon vessel is called forth, and it can take on the form of any hero from your Chain. Details are tricky, but the point is, you become a polymorph hungry for souls, taking various forms to match whatever needs killing

2) When you reach a Shard Avatar's abode, and the Boss Fight behinds, the chain is completely awakened, and all of your Eidolons are summoned, provided you have gathered enough Soulforce during the run.

Dead heroes progress as well, but in different ways, more linearly, so a mage will stay a mage and a rogue a rogue. Their equipment can grow more powerful as well, randomly or by your choice. It cannot be swapped or destroyed, so basically you just don't worry about it.

Additionally, you can always Consume any hero in the Chain if you want to buy yourself some time. Horrid as it sounds, eating the Black Ash is the one way to actually weaken the Curse, for a time.

In Eidolons, this will be your fate, time and again. The Bearer is the hero whom you control directly, one that carries the Pale Flame within them. Consumed by the Curse, bit by bit, their level of Affliction will grow, and with it their power, hunger and madness.

as their sanity and resistance fail, there will be various events and increasingly tough challenges that inevitably lead to the Bearer losing their mind. Before it happens, you must find a...

Scion is a hero whom you choose to be next after your current Bearer is no more. They can be found anywhere on the map - by yourself, or by the Wanderer if there was a complete wipe in your last dungeon.

Your Scion travels with you, but is not entirely controlled by you yet. They are afflicted by the Flame enough to be unable to turn down the quest, whatever they may think of it.

Don't worry, people generally lose their sanity in the Flame's proximity, which now engulfs most of Ersidria. There are madmen aplenty, and not only among the Veil Wardens! Some will even seek you out themselves, following a mystic sense. Most of them are raving lunatics that must be put out of their misery, but some can be worthy of the Quest.

It is up to you when to ask your Scion for the final favor. When they agree, you begin...

Do not despair. His fate was sealed the moment he received the Veil Sigil. Yet his sacrifice will not be in vain, if you can do what needs to be done.

Simply put, the Scion must slay the Bearer with the Black Blade and your ash will be added to the Chain

Some say he is himself an eidolon, from the era before the War, others - that he is the Witch King himself, come back to take vengeance on the lords of the Underverse. Alas, we do not choose our allies in this struggle.

An enigmatic figure that introduces you to the Quest, and the tool to carry it out - Apholon, the Black Blade -where the souls of your fallen heroes reside, as all those whom you slay in its presence. An evil instrument, stolen and turned against the Nether Gods by a knight of the Veil Order.

He will also form the first Ash Ring for the Eidolon Chain, and then he will be watching your progress, making sure the Quest does not fail when it can be helped. That is, he will find more heroes to take it up if both of yours are killed off. Don't mistake him for Gandalf, he does not care about any of your heroes, in fact, you don't know what he cares about, and I'm not going to spoil it for you :)

Thanks for reading, I hope it was clarifying and mystifying at the same time! Be sure to sign up for the mail-list, we're running a crowdfunding campaign soon! :) 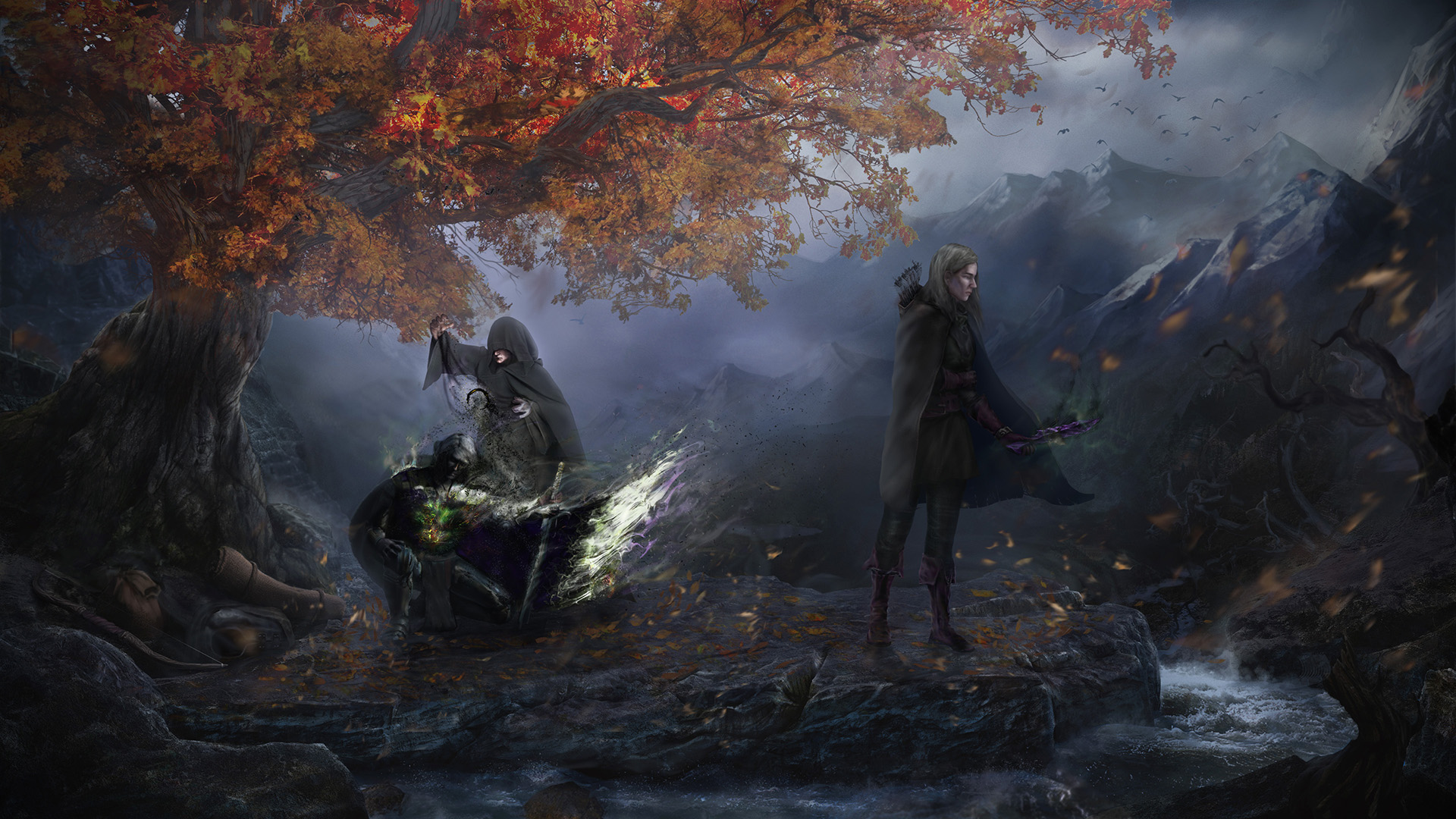