In this in-depth design-related post I'm going to do a breakdown of the core features in the game, let's get started!

The Nethergate campaign is split into two parts, after the skippable tutorial and story intro.

The first is about getting ready as best as you can, traveling open-world map, undertaking quests and building your chain of heroes by finding (or creating*) Scions to be the next Flamebearer.

It is played on a hand-drawn map but with considerable amount of randomization, dynamism and rules that keep it real - like time-capped quests, (d)evolving towns with ever-new merchants and vagabonds, and more.

The second part is a headlong dive into the storyline, which, if you survive it, will conclude the campaign. Of course, there will be autosaves there, but sometimes you will just have to do better in the 1st part to beat the game. No worries though, it's never about doing the same stuff - beyond the skippable intro, Part I is highly randomized.

In a sentence, Eidolons is designed as a recurring, ever-changing mystical journey , an emergent story of deeds and deaths, betrayals and sacrifices.

The original idea was to make a system-heavy game with atmospheric story elements that players will piece together themselves. Somewhat like Dark Souls perhaps, but with a different basis for replayability (quasi-immortality kind of sucks IMHO)

Each playthrough will  be about finding new strategies and ways to gather more power before the end comes. Those can be quite creative - you can ignore the main quest line completely, as long as you do well as far as hero(es) progression is concerned.

Eventually, even if you are feeding the Flame with souls and ashes of friend and foe alike, it will grow beyond your control and drive you to the quest’s resolution. But the way this happens will vary greatly - sometimes it will be gentle, sometimes dignified, and sometimes more like  a psychotic possession that takes over your last character.

2) Hybrid of roguelike and open-world rpg

To me, the vast and beautiful openworld games of late became more and more like a walks in a theme-park. Nice, but shallow. There's so much to do, there's little essential difference in what I do.

So Eidolons is an open-world with roguelike elements. What does it mean?

Ever wonder why Diablo2 is 100x times better than its successor? Perhaps you might have tried it in mortal mode too, and felt how different it was - how scary that moment when you are surrounded by demons and there's nowhere to run! How epic the feeling when you kill them all with 10% hp left and all potions spent... And then, facing those bosses, damn, I really felt scared sometimes (though I was rather young too), especially with that beast Duriel coming at me from the dark like a rushing walrus from hell!

So I am trying to give you this feeling in turn-based mode - when a battle starts, you will be likely to sit back and think first, take in the scene because it might be where your well-loved latest hero goes to ash.

On the one hand, it's about this concept built around death - you collect the ashes of your fallen heroes into a mystical Chain, to be raised in the final battle. (There is more to it, but I don't wish to spoil it all :))
On the other, things just need to be less bloated and edge-polished. To be clear, I’m not just trying to make your life into a hell of a pain - my goal with this game is to create a space in which good old rpg-gameplay will mean something again, feel real and become an experience!

For instance, for the sake of sanity, realism and self-respect, in Eidolons, we cut loose that inventory overflowing with trash that ten mules couldn’t carry on their backs; make away with the idea that you hero can grow indefinitely by slaughtering petty enemies here and there...

I hope to build an open-world with just the essentials - the main heroes, their progression, their decisions, their rise and fall. No item-hoarding, rat-killing or cat-saving quests. This way Eidolons would offer a high-level play - only giving you big decisions to make, for which the consequences are worth caring about.

These are huge, often immobile monsters that will be made up of multiple parts - such as tendrils, claws and electrified brains.

They will stand out completely from the other units - they will be 3d rendered in fact, and fully animated. Chief example here is the Black Leviathan - our Lovecraftian archnemesis. Him you will certainly fight with the Eidolons of your loyal dead heroes at your side - in something like a desperate raid...

Designwise, turn-based combat can make those fights into riddles to solve. Personally I love the idea behind 'grinding down' the bosses one death at a time, but I'm more into thinking than clicking and key-slamming.

Also, tactics will be different from what you have used elsewhere - instead of moving to or from an enemy, you will move to avoid their colossal zone-attacks. 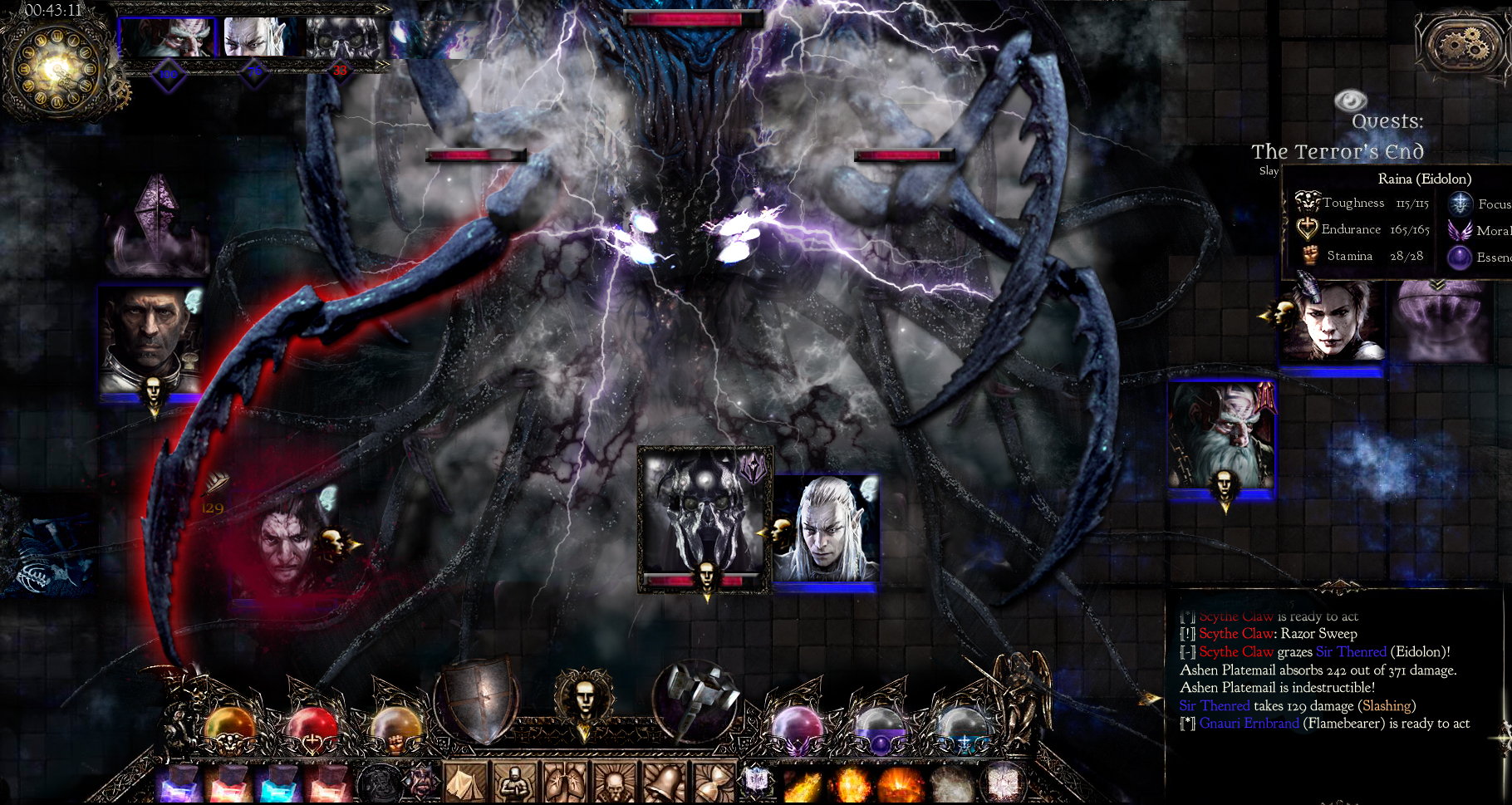 I like to think of Eidolons combat as a slow motion simulation.

You should always think in terms of 'will I make it in time before X happens? Should I turn around now and kill this thug before he backstabs me? Or is there time to finish off the one in front first?'

This way, combat is designed to make you feel right in the skin of the desperate hero, fending off blows, killing foes just before they can get you, letting the killing blows miss you by a breath as you move smartly around the field of battle.

I know that some people are really used to 'turn-based' meaning that their actions can all be made in a single go, which is their "turn". For me it only worked out in my mind, while in reality, I always hated seeing one unit marching across a field, jumping up and landing a hit, while everybody else stands and watches them go.

Eidolons offers the so-called Dynamic rounds system - units make (sequences of) atomic actions one after the other. This is real fighting, just in put on turnbased rails. It makes things a bit more flowing and unpredictable, but still controlled enough to be about thinking rather than clicking. And to enhance this, the game has quite a bit of depth for the tactical combat - with details like armor-hit/miss, stamina tricks, dynamic restoration, realism-centered core rules from wounds and bleeding to panic and confusion effects, controlled by numeric values like Morale and Focus.

Once you are done envisioning your perfect hero-chain, immersing yourself in the gripping narrative  and have looking over the (awesome) world map, what you get down to is... Dungeons!

Yes, the actual core gameplay of Eidolons is dungeoncrawling in its pure form. The kind that makes you pay attention, guess what is what, make use of strange objects at your risk, and utilize stealth - with enough skill, you will be able to overwhelm some foes before they notice you! Same rules apply to you - enemies may not recognize you as their foe from afar. Speaking of which - what's the deal with Light&Shadow feature?

Virtual simulation in which light sources give off a numeric Illumination value to objects and cells around them, using clear-line rules etc. Apart from adding realistic lighting feel without actually adding 3d/vector lights, the main point of this is the Outline system. This one simulates the actual stumbling the dark, the creepy "something is out there" feel and the relief you feel when you see it is just a monstrous statue. Which surely won't come alive when you step up on that treasure-filled dais ...

Apart from that, dungeons  in Eidolons are filled with patrols, guards, idlers and stalkers that will follow you stealthily until you are in trouble...

This dark odyssey is about how you are able to carry on without dropping the ball - one so heavy it would shatter the world.

This is what defines the mood of your quest, its dark and epic nature, under the press of time and with little hope of salvation for any of the fate-chosen heroes. During the campaign, you will go through cycles of finding new heroes to carry the Curse - eventually, each Keeper becomes hollowed by the dreaded Flame and must be replaced by a new hero. But each death will bring your closer to the mystery and make you more prepared for the final struggle.

Most of the time, your force will be that of two heroes, one normally somewhat more powerful than the other.

While in exploration, you stick closely together for the most part, and in combat, everything depends on how well you can sync your powers and shield each other's weaknesses.  From roleplaying point of view, you are the Keeper, and tThere will probably be the option to let Scions be Ai-controlled.

Also, if your Scion dies, you have the option of sacrificing your Keeper to bring them back, bearing the Curse themselves.

The relationship between your Keeper and Scion is often a tentative matter. The knowledge of what must be done in the end can lead to dark words, and darker deeds.

Eventually, you will have to ask him to relieve you of the burden, a thing that many will find hard to do. Such sympathy may ruin your hopes of victory... For if the Keeper succumbs to the flame, you will have to defeat him with your scion, which may prove hard. Failure to do so spell the end for your saga. And even if you succeed, their souls will be forever scarred by their final moments of grave torment.

And while the ash in the Chain will produce a perfect physical replica of the hero that fell, the things that happened to their souls may be important as well. Those who died to torture or betrayal may never return as they were in life...

On the other hand, as the flame grows in power, you will be able to see those who have the mark of fate on them, those to whom the Flame came in their dreams. These will set out in the wilds at night to follow the ritual of the Veil. Encounters with them can win you a powerful and dedicated Scion, or lead your into a trap - for at some point, you will have to ask yourself if what you see is real, or a trick of your slow-burning psyche.

The Keeper will receive visions from the Flame which will test him, and as a result, either weaken or strengthen him... and often just make him less normal.

Just a bit about the affliction itself here (there is little I can explain without spoiling the story).

The Curse will be the leitmotif by of the journey. It all goes in cycles - when a new Keeper takes up the Flame,  there is a glimpse of a reprieve, as the Curse takes its time to wrap around its new bearer. In this time, you should start the search for the next Scion and thus regroup yourself.

At some point however, when a hero draws the Curse from their hollowed companion, they will soon receive the Vision, and know it for what it is. A sign that marks the end of the journey, as no one will be able to take over the Flame from now, until it finds its fate. You can choose to seek the Vision yourself, if you feel that you are ready. It may help you to start the finale on the right foot, choosing your own path to your destiny, rather than being gripped and dragged by eldritch forces.

This way, cycles of psychological pressure are designed to make you appreciate the rare glimpses of hope, and feel what it means to be a hero in a troubled world.