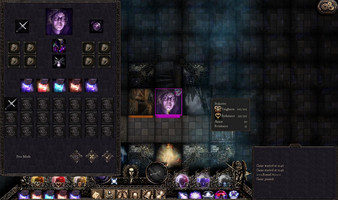 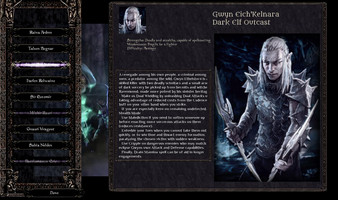 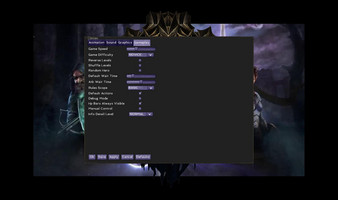 Hey folks, I've been working on core logic and *invisible things* mostly, but today I also updated the UI and have something to show.

So there you have the (1) Combat Inventory - a small panel that just lets you swap out stuff between your backpack and equipment (including the Quick Slots in which you can have potions, daggers and magical items), or drop burdensome things on the ground.

The game actually supports many item-tricks, like throwing your weapons from the hand or from quick slots, tossing items to allies, applying poison and other coatings to arrows and sharp weapons... It's a roguelike rpg, after all! :)

The (2) is just an enhanced "down" version of the button, and it also shows a curious glitch I have been *Unable* to figure out - my text gets cropped in windowed mode in one particular scroll panel!! Doubt you can help me, but I'm sharing my pain anyway :)

And finally the (3) is a new Options Panel I made with a customized skin originally created by Raymond "Raeleus" Buckleyby (thanks mate! Creative Commons ftw! :))

In the end, I have to admit that making UI in LibGdx is not the best of experiences, I bet that Unity-Crowd would feel aghast at the amount of code-tinkering I had to do to get this stuff to work (and still, anyone can see it's rather raw yet).

Yes, and about this 'massive revamp', you wouldn't believe how much code goes into making undo and cancel buttons work smoothly. Why do I even need them? Well, in-battle inventory use will be something you don’t want to accidentally mess up - like drop your sword or take the wrong potion out of your rucksack - and the number of things you can do in your Inventory is limited when you’re fighting!  You also provoke an Attack of Opportunity by doing this, so it's always a risk and a cost.

Then there is the need for a solid  underlying logic in the “Headquarters” (HQ), where you're making and leveling-up your heroes. With it, I committed to the principle - “We cannot operate on real stuff in HQ, it’s too dangerous”.

Sometimes there will be irreversible changes, and things you do there will be rather important. Character progression will be a serious thing I am not planning to add any ‘re- stats points’ features -  it’s already enough that decided to go with the classic xp system instead of the more complex ‘train by use’.

There are features like Spell Upgrades - you will add certain ‘runes’ to the spells in your spellbook, item enchantments and encrustation with Soulgems/Eidolon shards and of course, repair, shuffling the inventory new item construction (why else would I want to have my items actually consist of material pieces like iron and red oak?)

Stay tuned, while I stay right on it, cheers! :)